This is why you should use us

Highest performance, a higher torque density for the same compact dimensions and is available in 20 sizes with an output torque of 1.3 to 1,300 kNm.

The planetary drives of the 300M series are equipped with newly designed planet bearings, which grant up to 50 percent more torque at high numbers of cycles.

The new planetary gear 300M series by Bonfiglioli is fully interchangeable with the well-known planetary gear 300 series and is suitable for integrated geared motors, IEC and NEMA electric and hydraulic motors.

Optionally, Bonfiglioli offers a compact self-cooling system for the entire planetary gear series, which increases the thermal performance by three times. The self-cooling system is robust and connects directly to the motor in a reliable way, allowing use of the full mechanical power without needing further external cooling circuits.

The 300M series, thanks to the enhancement of the planet bearings arrangements, ensures compactness, cost savings as well as up to 20 percent more lifetime and reliability.

With the optional integrated self-cooling system, the new 300M series allows either a saving of at least one size or is an outstanding alternative to helical gearboxes. In addition, this integrated option is environmentally-friendly as no external cooling system is needed.

Typical industries for the application are material handling, cranes and winches, mining, recycling, water and waste water, food and beverages, as well as numerous other industries where it comes down to a high torque density with an optimized space requirement. 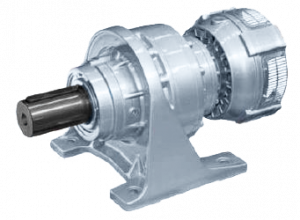 There is now sent a request for inclusion in our customer base.

If your company is recognized for the terms you will within 24 hours receive an email with your password.

You can find out more about which cookies we are using or switch them off in settings.

At klee.dk we use cookies so that we can give you the best possible user experience. Cookie information is stored in your browser. It performs functions such as recognizing you when you return to our site and it is helping our team understanding which sections of the site you find most interesting and useful.

The website uses Google Analytics to collect anonymous information such as the number of visitors and the most popular pages. Keeping this cookie enabled helps us improve our website.

The website uses cookies for customer chat. We use Zendesk Chat as chat program. If you decline this cookie, you will not be able to use the chat.

Cookies are small pieces of information stored on your computer's hard disc. This information is used to confirm your identity when you log on to the website or add something to the shopping cart.

The information is in no way harmful to your computer and does not contain confidential information.